U.S. exports of crude oil and petroleum products have more than doubled since 2010 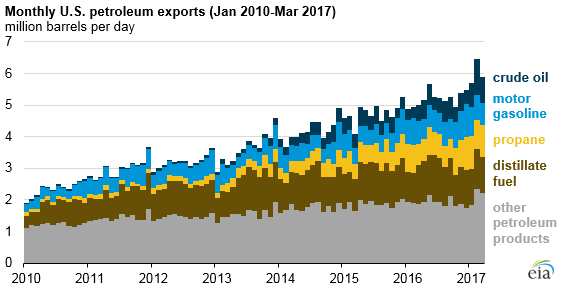 U.S. crude oil and petroleum product gross exports have more than doubled over the past six years, increasing from 2.4 million barrels per day (b/d) in 2010 to 5.2 million b/d in 2016. Exports of distillate, gasoline, propane, and crude oil have all increased, but at different paces and for different reasons.

Beyond the lifting of crude oil export restrictions, other factors such as favorable price differentials, lower shipping costs, and rising domestic production have increased U.S. crude oil exports. U.S. production fell through the first nine months of 2016, but increased at the end of 2016 and has continued to increase through the first five months of 2017. U.S. crude oil exports in 2016 were 55,000 b/d greater than exports in 2015—a slower rate of growth compared with year-over-year changes in 2015 and 2014.

Unlike the recently slowing increases in U.S. exports of crude oil, distillate fuel, and motor gasoline, propane export growth has accelerated. Propane exports are shipped to different destinations than other U.S. petroleum exports. Most other U.S. petroleum exports stay in the Western Hemisphere, but the top destinations for U.S. propane exports are Asian countries such as Japan and China. Propane has many non-transportation sector end uses, including as a fuel for heaters and cookstoves and as a feedstock for petrochemical industry.