Despite declines in coal’s generation share, IEO2017 projects that coal will remain an important component of China’s energy mix, peaking at nearly 4,400 billion kilowatthours (bkWh) by 2030. However, as China continues to replace older, less efficient generators with more efficient units, China’s power sector coal consumption is expected to peak as soon as 2018, at 4,800 million metric tons.

As part of China’s 13th Five-Year Plan, a total of 150 gigawatts (GW) of new coal capacity has been canceled or postponed until at least 2020. Increasingly strict controls on total coal capacity and power plant emissions are expected to prompt the retirement of up to 20 GW of older plants and spur technological upgrades to China’s remaining 1,000 GW of coal power.

Coal remains China’s largest source of electricity, accounting for more than 72% of the nation’s electricity generation in 2015. In the Reference case of EIA’s long-term international energy projections, China’s coal share of generation steadily decreases to nearly 50% by 2040, as generation shares from renewables and nuclear both increase. By 2040, fossil fuels (coal, natural gas, and petroleum) are still expected to make up most of China’s electricity generation mix. 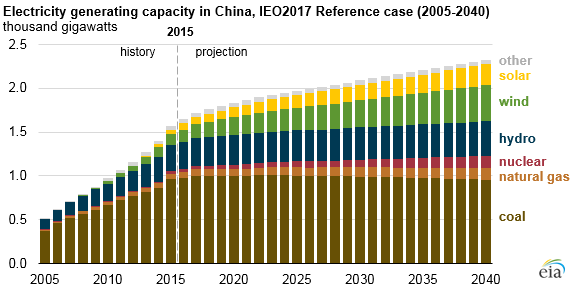 EIA expects electricity generated from natural gas to grow by 6.5% between 2015 and 2040, with an addition of 70 GW of natural gas capacity. To support continued development, some energy-intensive urban areas such as the Beijing-Tianjin-Hebei metropolitan area and the northeast region of China will be encouraged to replace coal with natural gas.

Current renewable generation in China is dominated by hydroelectricity, which is the country’s second-largest source of generation after coal. Wind and solar currently account for relatively small amounts of generation, at 2.7% and 0.5%, respectively. However, EIA expects substantial growth over the coming decades, consistent with the targets in China’s most recent Five-Year Plan, designed to uphold the country’s commitment to the Paris Agreement within the United Nations Framework Convention on Climate Change.

In China’s nationally determined contribution (NDC) that it filed as part of the Paris Agreement, the country expressed its intention to reduce carbon dioxide (CO2) levels and increase the share of energy consumption from non-fossil sources to 20% by 2030. EIA projects solar capacity to grow to 240 GW by 2040, or by more than 7% per year from 2015 to 2040. Similarly, EIA expects nearly 280 GW of wind capacity to come online between 2015 and 2040, a growth rate of nearly 5% per year.

China’s most recent Five-Year Plan also set a target for the addition of 58 GW of nuclear capacity by 2020. Currently, China has 38 operational nuclear power reactors, with another 19 under construction. In 2015, China’s nuclear power plants generated an estimated 161 billion kilowatthours of electricity, representing 3% of China’s total net electricity generation.

More information about projected energy consumption in China and other countries is available in EIA’s International Energy Outlook 2017.