Cumulative sales of plug-in electric vehicles (PEVs), including battery electric vehicles and plug-in hybrid electric vehicles, reached 1.2 million worldwide in 2015. Still, PEVs account for less than 1% of vehicles in use globally. Future developments in battery technology, policy, and consumer preference have important implications for future PEV adoption and serve as a great source of uncertainty in meeting future mobility demand.

An Issues in Focus analysis conducted for EIA’s most recent International Energy Outlook (IEO2017) considers some of these uncertainties through different PEV penetration scenarios and considers the effect that differing rates of adoption have on worldwide energy consumption. EIA developed two IEO2017 side cases to determine the effect on worldwide energy use if PEV adoption were higher or lower than projected in the Reference case. 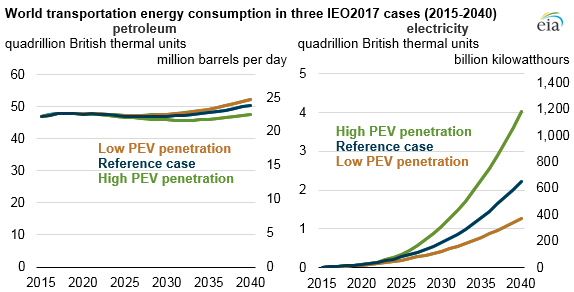