EIA’s recently released Annual Energy Outlook 2018 (AEO2018) Reference case projects that U.S. tight oil production will generally increase through the early 2040s, when it will surpass 8.2 million barrels per day (b/d) and account for nearly 70% of total U.S. production. Tight oil production made up 54% of the U.S total in 2017. Development of tight oil resources is more sensitive than nontight oil to different assumptions of future crude oil prices, drilling technology, and resource availability, but tight oil remains the largest source of U.S. crude oil production in all of the AEO2018 sensitivity cases. 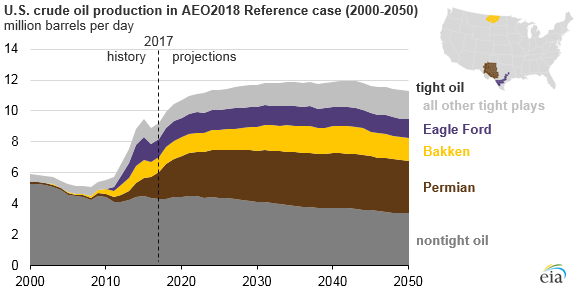 However, future growth potential of domestic tight oil production depends on the quality of resources, technology and operational improvements that increase productivity and reduce costs, and market prices—factors with futures that are both interconnected and uncertain. AEO2018 includes several sensitivity cases that incorporate different assumptions regarding price, technology, and resource recoverability.

The High Oil and Gas Resource and Technology case uses more optimistic technology and resource assumptions than in the Reference case under the same base world oil price assumptions. In this case, tight oil production increases throughout the projection period, reaching 14.6 million b/d by 2050, or 77% of total U.S. production, as higher productivity reduces development and production costs.

In the Low Oil and Gas Resource and Technology case, which uses more pessimistic technology and resource assumptions under the same base world oil price assumptions, tight oil production still increases from its current level, reaching 5.6 million b/d in 2021, and then decreases to 4.4 million b/d by 2050. Total U.S. oil production in 2050 in this case reaches 7.2 million b/d, which is well below the Reference case level of 11.3 million b/d. 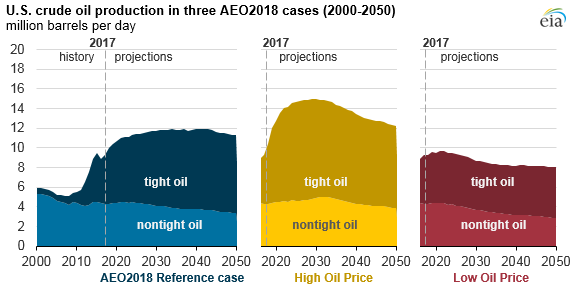