China, India, and Africa are three of the most populated parts of the world. Their economies collectively consume about one-third of all global energy, and their energy consumption is projected to grow faster than the rest of the world through 2040. As a result, changes in these economies have significant implications for global energy markets.

Today, EIA is releasing three reports in its International Energy Outlook 2018 (IEO2018) that discuss the energy implications of potential changes in these economies. A related webcast presentation and panel discussion will begin at 9:00 a.m. Eastern Time this morning from the Center for Strategic and International Studies.

Key findings of the IEO2018 include

IEO2018 builds on the Reference case presented in last year’s outlook, IEO2017. The IEO2017 Reference case has been updated with macroeconomic information, but no modeling changes have been made to other end-use sectors. This year’s outlook offers a macroeconomic perspective regarding the uncertainty in economic growth in China, India, and Africa. The side cases in IEO2018 increase annual average growth in real gross domestic product (GDP) between 2015 and 2040 to higher levels than in the IEO2018 Reference case.

To consider uncertainty related to economic structure, the composition of economic growth is also varied in the cases for India and China. EIA also generated an economic growth case where Africa’s economy grows faster than in the IEO2018 Reference case.

Today’s webcast includes a presentation from EIA Administrator Linda Capuano and a panel discussion with Todd Moss from the Center for Global Development, Anvita Arora from King Abdullah Petroleum Studies Research Center (KAPSARC), and Edward Chow from the Center for Strategic and International Studies. 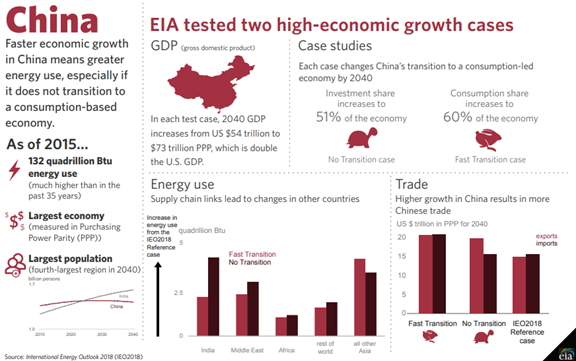