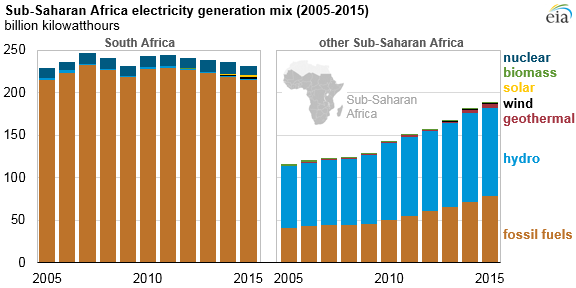 According to EIA’s international electricity statistics, hydroelectric and fossil fuel-powered generation were the top sources of growth between 2005 and 2015 in Sub-Saharan Africa (SSA), defined as the 49 countries fully or partially south of the Sahara Desert. During that period, hydroelectric generation increased by about 40% in the region, while fossil fuel-powered generation increased by 15%. SSA electricity generation totaled about 420 billion kilowatthours (kWh) in 2015, including distribution losses and exported electricity, an increase of 22% during the decade. 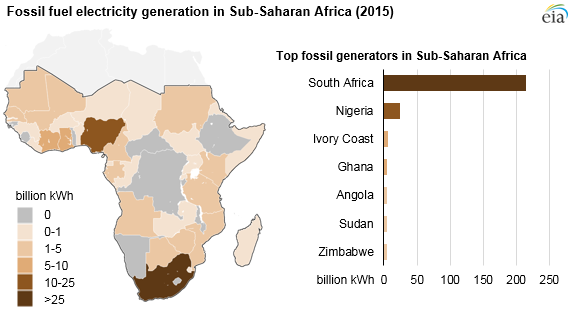 South Africa has started to diversify its generation portfolio, adding generation from wind, solar, and biomass in recent years. Outside of South Africa, total generation grew by 63% from 2005 to 2015. Hydroelectric generation was the largest source of electricity. Unlike South Africa, natural gas fueled almost all of the added fossil fuel-powered electricity in the rest of the region. 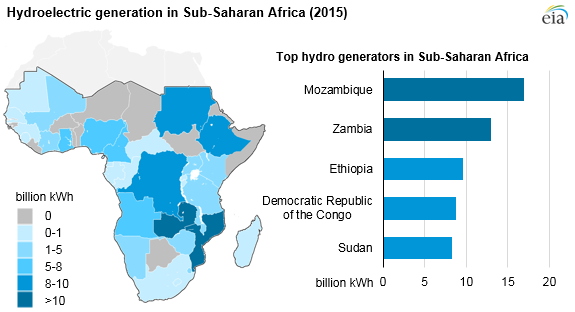 Sub-Saharan Africa consumed about 372 billion kWh of electricity in 2015, up from about 304 billion kWh in 2005. The remaining generation went to distribution losses and exports. South Africa was by far the largest electricity consumer in the region, accounting for about 209 billion kWh (56%) of consumption. South Africa also accounted for more than 5% of SSA’s population and generated about 20% of SSA’s overall gross domestic product in 2016. Electricity consumption grew by 2% in South Africa from 2005 to 2015, while the growth rate averaged about 63% across the rest of SSA.

Growth in electricity consumption depends on improved electricity access. According to the U.S. Agency for International Development’s Power Africa report, about two-thirds of Sub-Saharan Africa’s population does not have access to electricity, the highest percentage for a major world region. Industry experts estimate that the share of the population that has access to electricity in SSA will grow by 2030, driven by initiatives such as Power Africa, the United Nations’ Sustainable Development Goals, and a broad range of policy commitments and pledges made by governments and private industry in SSA.

Despite these efforts, about 600 million people in the region will likely remain without electricity access in 2030. According to EIA’s International Energy Outlook 2018, in both the Reference Case and the High Economic Growth Case, Africa is the only region with a projected decrease in per capita energy consumption—including electricity—from 2015 to 2040, a result of projected population growth across the continent exceeding energy consumption growth.