In June 2019, the Chinese government introduced a subsidy program that established new incentives for the production of natural gas from tight formations and extended existing subsidies for production from shale and coalbed methane resources. This subsidy is scheduled to be in effect through 2023. In addition to the changes in the subsidy program, the government allowed foreign companies to operate independently in the country’s oil and natural gas upstream sector.

Production of tight gas, shale gas, and coalbed methane collectively accounted for 41% of China’s total domestic natural gas production in 2018. China has been developing tight gas from low-permeability formations since the 1970s, especially in the Ordos and Sichuan Basins. Tight gas production was negligible until 2010 when companies initiated an active drilling program that helped lower the drilling cost per vertical well and improve well productivity.

Shale gas development in China has focused on the Sichuan Basin: China National Petroleum Corporation’s (CNPC) subsidiary PetroChina operates two fields in the southern part of the basin and the China Petroleum and Chemical Corporation (Sinopec) operates one field in the eastern part of the basin. PetroChina and Sinopec have respectively committed to producing 1.16 Bcf/d and 0.97 Bcf/d of shale gas by 2020, which, if realized, would collectively double the country’s 2018 shale gas production level. 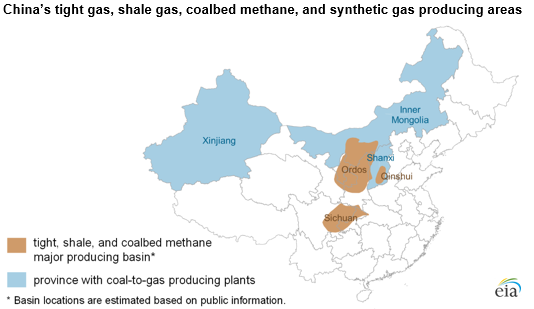 China also generates synthetic natural gas from coal, a source that accounted for 2% of China’s natural gas production in 2018. China’s synthetic gas projects involve gasifying coal into methane in coal-rich provinces, such as Inner Mongolia, Xinjiang, and Shanxi. In 2016, the Chinese government hoped to reach 1.64 Bcf/d of coal-to-gas production capacity by 2020. China’s coal-to-gas production was less than 0.3 Bcf/d in 2018 as stricter environmental mandates have slowed down plant construction and increased the cost of further developing coal-to-gas.