Brazil’s growth in distributed generation from renewable resources—especially solar—has increased since it implemented net metering policies in 2012. As of mid-November 2019, owners have installed more than 135,000 renewable distributed generation systems in Brazil, totaling about 1.72 gigawatts (GW) of capacity, according to the Brazilian Electricity Regulatory Agency (ANEEL).

ANEEL’s policy initially allowed small generators using hydro, solar, biomass, wind, and qualified cogeneration of renewable sources of up to 1 MW of capacity to qualify for net metering. In 2015, ANEEL amended the rule to increase the maximum capacity for up to 3 MW for small hydropower and up to 5 MW for other qualified renewable sources.

Qualified generators can choose to sell surplus generated electricity back to Brazil’s grid in return for billing credits. As part of the billing credit structure, net-metering customers can generate credits earned on days when they generated more electricity than they consumed. Before 2015, these credits expired after 36 months, but now credits for excess generation expire after 60 months. 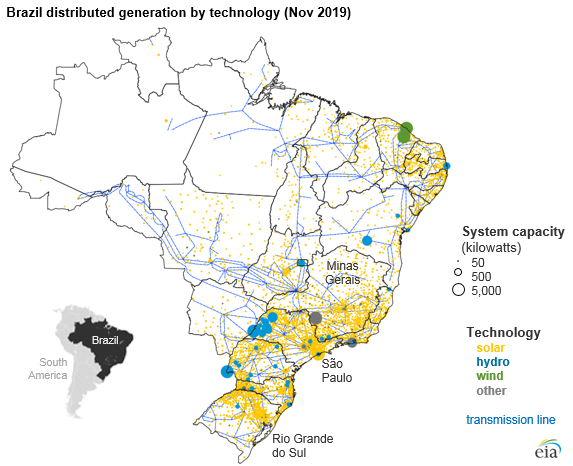 At the end of 2018, ANEEL released a regulatory impact analysis and conducted a series of public hearing meetings to discuss economic aspects and sustainable growth of distributed generation in the country.