The Global Small-Scale LNG Market is projected to grow from 30.8 MTPA in 2016 to 48.3 MTPA by 2022, at a CAGR of 6.7% between 2017 and 2022. The small-scale LNG market across the globe is driven by their increasing LNG demand from remote locations by applications, such as industrial & power, and the ability to transport LNG over long distances without the need for heavy investment such as pipelines. By terminal type, regasification terminal is expected to grow at a highest CAGR between 2017 and 2022. The increasing demand for LNG from the remote locations and global commoditization of LNG are some of the major factors that are driving the demand for small-scale LNG in this segment. 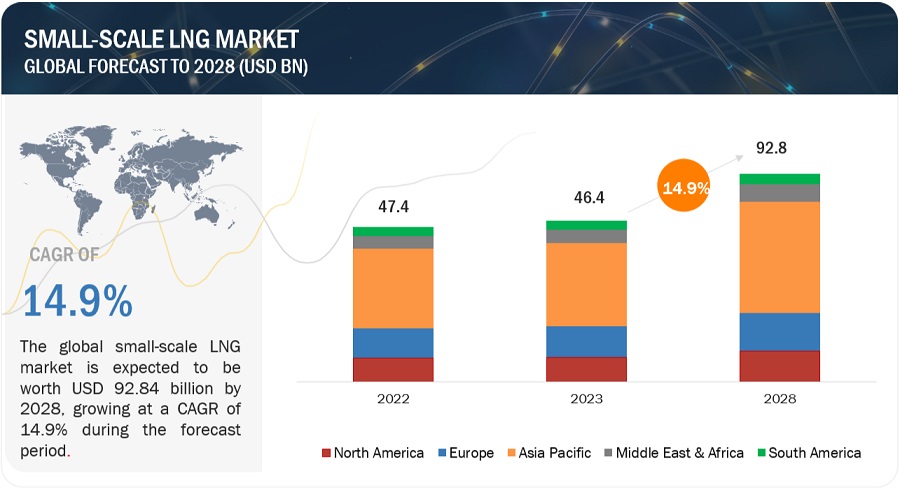 Heavy duty transport companies save approximately 30% on fuel costs on LNG-fueled trucks, compared to diesel fueled trucks, and produce 30% lower emissions. Air pollution from diesel engines is one of the biggest concerns, especially in areas that struggle to meet air-quality standards. On the other hand, natural gas causes complete combustion and fewer emissions than diesel. It is estimated that increasing environmental concerns from the utilization of diesel vehicles is likely to increase the adoption of green fuel technologies such as natural gas. In the case of electric power generation, natural gas engines below 150 KW are more cost effective than oil fueled engines. Fuel cost is one of the major cost for road transportation, which is strongly subject to excise taxation. Typically, an LNG-fueled Volvo FM truck can travel up to 600 km with LNG. With an additional 150 litres of diesel, it can travel up to 1,000 km without refuelling. Thus, reducing the cost of travel. With additional LNG liquefaction capacity expected to come online in the next few years, an oversupply of LNG is expected, which will drive the price of LNG further lower. Considering all these factors, both developed and developing countries are undertaking feasibility studies to recognize the techno-economics of shifting their economies from diesel to natural gas. Therefore, the cheap price of small-scla LNG over others alterantive fuels will drive the growth during the forecast period.

North America small-scale LNG market is projected to grow at the highest CAGR during the forecast period.

Get 10% FREE Customization on this Study @ https://www.marketsandmarkets.com/requestCustomizationNew.asp?id=226707057